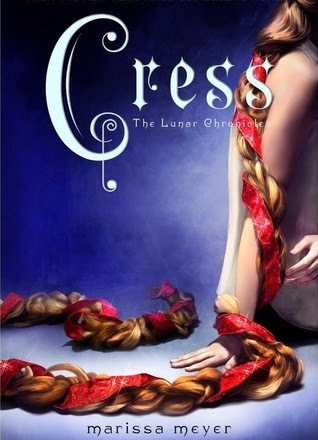 Summary:  In this book in the Lunar Chronicles, Cinder and Captain Thorne are fugitives on the run, now with Scarlet and Wolf in tow.  Together, they're plotting to overthrow Queen Levana and her army.

Their best hope lies with Cress, a girl imprisoned on a satellite since childhood who's only ever had her netscreens as company.  All that screen time has made Cress an excellent hacker.  Unfortunately, she's just received orders from Levana to track down Cinder and her handsome accomplice.

When a daring rescue of Cress goes awry, the group is separated.  Cress finally has her freedom, but it comes at a high price.  Meanwhile, Queen Levana will let nothing prevent her marriage to Emperor Kai.  Cress, Scarlet, and Cinder may not have signed up  to save the world, but they may be the only hope the world has.  (Summary from book jacket and image from http://goodreads.com/)


My Review:  I am thoroughly enjoying how Marissa Meyer is weaving old fashioned fairy tales into a futuristic series.  Cress takes us even deeper into the Lunar Chronicles.  I always fear giving too much away with reviews of series books.  If you're even the slightest bit worried I might spoil it for you, please quit reading.  The last thing I'd want is to ruin this series for someone since it's been so fun to read.

I will start by saying that Cress was far longer than the previous two books.  While this is expected when so many characters are combined and their storylines intertwined, I also think there was probably less editing on this one (similar to how Harry Potter ended up...).  That said, the beginning was a bit slower for me to jump into--it had also been a while since I'd read Scarlet and Cinder, which means the cobwebs were being dusted off in the process as well.  Once the rising action started to build significantly, I had a hard time putting the book down.  Meyer does a nice job of throwing in just enough twists and turns to keep you guessing, but not enough to seem unreasonable.

Her characters are of typical depth for YA lit, but aren't your typical "I'm falling in love at the drop of a hat with a bad boy" that seems to dominate the YA world.  Her characters are dealing with difficult decisions and they take them seriously.  There are even descriptions of the characters feeling shock after traumatic situations--again not something you always see in YA lit.  Is it all believable?  No.  But this is futuristic and fairytale.  I love that I can suspend disbelief and enjoy a world where our previous notions of fairytale stories are shaped into a new form.

There's an aspect to these books that I feel I need to expound upon because I have been so pleased with it. I am loving these strong female protagonists!  The emphasis for all three women (Cinder, Scarlet, and Cress) is not on their beauty, but on their intelligence and what they can do.  How refreshing for today's girls!  It's so, SO important to focus on what girls can do and think, and not just their looks; especially when today's media says otherwise.  Girls are bombarded daily with a perfect image from a very young age.  I'm not immune to wanting to look my best, but I also want my daughters to know that that's not everything.  Thank heavens there are good books to help guide our daughters as well (thank you Hermoine from HP for being a great start amongst many others).  Cinder also brings into play the consideration of not being beautiful by societal standards.  Just because you don't look like what's on the cover of the magazine doesn't mean you're not beautiful and worthwhile.  Additionally, Cinder brings up the comparison of inferiority perceptions based on race.  I truly hope this spurs young readers to consider the implications of prejudice.

I am truly looking forward to the next installment, Winter (2015?!  Really?).  I just hope we don't have to wait too long!

Lastly, I just have to share this last little piece of goodness: Marissa Meyer has a great website.  After searching through it for more information on Winter, I found this little Gem.  The Little Android (a version of The Little Mermaid) that you can read for free online!  Check it out!

For the sensitive reader:  There are a couple kiss scenes, depictions of violence and death (but not graphic), and talk of deception and lies.

Sum it up:  Take Rapunzel, throw her story into a futuristic earth and moon world, combine a version of Cinderella and Little Red Riding Hood, and you get this fantastic piece of YA lit.
Kari
Share

Thoughts about this review.